As the ‘Collusion’ Turns: The Trump/Russia Plot Sure Has Been Downgraded From 2016 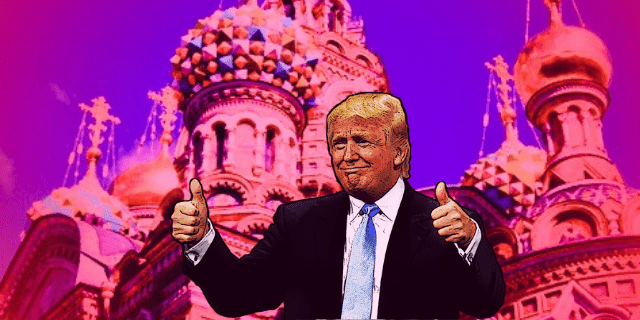 I go away for a week for my first vacation in years and the Cold War relaunches!

Surprisingly, I was able to stay off Twitter and news websites for the majority of vacation, but when I caved, the newly majestic and made over Robert Mueller—yea, the same Bush-ite who pushed weapons of mass destruction and rounded up immigrants after 9/11 for the crime of being brown—dropped his latest gem in the never-ending saga As the Kremlin Turns, revealing that then-candidate Trump’s “fixer” Michael Cohen was approached by an anonymous Russian with the offer of “synergy” between the campaign and Moscow.

And in a double whammy, prosecutors from the Southern District of New York revealed Trump himself directed the payments made by Cohen to pay off Stormy Daniels and former Playboy model Karen McDougal.

Of course, a candidate for president violating campaign finance laws for hush money payments to his mistresses is a big deal. Also, although it’s not illegal, it’s certainly not ethical that candidate Trump was trying to woo Russian oligarchs—and President Vladimir Putin—to land a Trump Tower in Moscow while he was simultaneously proposing policies as a candidate that would be favorable to Russia; i.e. the loosening of sanctions, re-opening diplomatic talks, and potentially pulling the U.S. out of NATO.

But, if this is the extent of what Robert Mueller has (which we don’t know), I—and I hope objective, non-deranged corporate media pundits and political hucksters like Rep. Adam Schiff—are left as unsatisfied as I was at the end of the once-great House of Cards (loved Robin Wright as the lead character in the post-Kevin Spacey final season but HATED the ending!).

Why the dissatisfaction? Because this was not what was hyperventilated to me by the Hillary Clinton campaign and its stenographers on CNN and MSNBC in 2016.

For those who don’t possess selective amnesia, remember what the original “collusion” charge was? That the Trump campaign knowingly coordinated with Russian government operatives—the latter who had hacked emails from the DNC and John Podesta—to release emails they knew Russia stole at a time and in a way that would cripple the Clinton campaign in the homestretch of the election.

Regardless of my thoughts on Clinton or her campaign, echh hemm, clear my throat—warmonger, phony, Republican-lite—if this were actually true, it would be one of the biggest political criminal scandals in American history. This would be a big deal—not because the narrative that Russia is actually a grave “enemy of the state” is actually true (as Oliver Stone so brilliantly enlightened in The Untold History of the United States, that’s just bullshit propaganda fed to us for over a century to keep the military industrial complex booming)—but because a political campaign knowingly working with a foreign government to disseminate illegally obtained data is a big deal, whether it’s Russia, Israel, China, or the Penguin Government from the North Pole.

This was the original charge that was made by the likes of Donna Brazile and Clinton campaign chiefs John Podesta and Robby Mook, all three of whom I had the delight of challenging at the third presidential debate while the rest of the corporate media was more busy challenging the debate buffet table.

[Status Coup will only grow with YOU behind us to do more great reporting. Become a member for as low as $5-10 a month and get bonus content]

And going on three years later, there’s still no evidence this occurred. Of course, Mueller could ultimately have a smoking gun in his back pocket that concretely proves that the original charge is exactly what happened. But the laws of Washington D.C. gravity tend to apply to investigations like this—if he had the goods, it probably would have leaked like a sieve by now.

Yet, watching CNN and MSNBC right now, you’d be expecting video to imminently come with Trump, Putin and the gang downing vodka while techies work in the backdrop to go through the treasure trove of Clinton/DNC emails.

None of the media and political punditry of the past few days have any bearing in reality—it’s all made-for-TV, the plot-thickens nonsense to try to inch us all closer to the collective collusion payoff that these same schmucks have been promising for three years.

This “collusion”—Trump trying to land a Moscow hotel and Cohen and over a dozen of other Trump campaign officials talking to Russians during the campaign—might merit raising eyebrows, but it certainly isn’t what the early days of RussiaGate hysteria alleged.

And while we’re at it, let’s just point out: the selective media hyperventilation over the latest Trump/Russia revelations is great and all, but where were these same patriots in the media hollering when:

-President Obama chose the exact cabinet Citigroup instructed him to

-Dick Cheney led us into Iraq to boost Halliburton

-Israel’s “meddled” into our elections

I mean, the list goes on…and on….and on. But none of these illegal and/or unethical acts matter to the corporate media because there’s no Russian boogeyman to gin up audiences with. This is what our corporate politics and media have become: meanwhile, Flint remains poisoned four-and-a-half-years later, the government continues to surveil activists and progressive groups, black men continue to be executed by the police, dangerous pipelines continue to be built through indigenous and minority communities, local governments overrule the will of the people by overturning ballot measures, losing Republicans ram through laws to strip newly elected Democrats of their power, and half the country remains living in horrible poverty.

In the end, the collusion the media cares about most is what satisfies their noodle-brain palates—a Cold War reenactment serving as a craven ratings ploy.

But the criminal collusion that’s actually stolen the phantom democracy we never really had—the one between our government and the corporations—remains intact.

Editor’s Note: Status Coup’s GoFundMe is halfway to its goal! If you want to see REAL reporting in the field, consider supporting!