Mainstream media has already declared victory over Senator Bernie Sanders in the Iowa caucuses that will take place seven months from now, but data and history show that dancing on his grave is vastly premature. 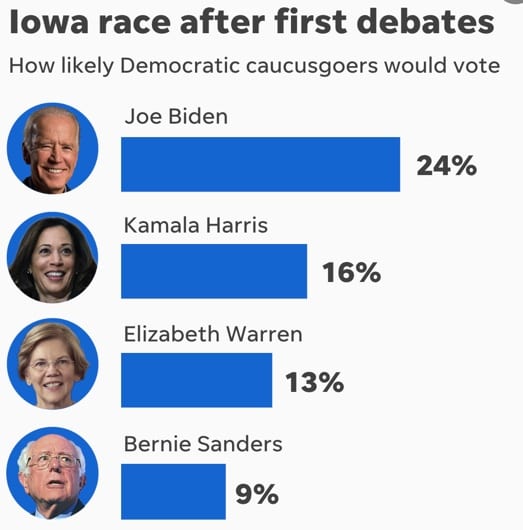 But looking under the hood and beyond splashy and sensational headlines like that of USA Today, which proclaimed “Kamala Harris surges in Iowa as Bernie Sanders suffers after debate,” tells a different story.

The poll, which featured 500 respondents, is misleading in more than one way. First, Suffolk/USA TODAY polled just 29 people (5.8%) between the ages of 18-25, which is a key age demographic that gravitates toward the Vermont Senator. In entrance polls from the 2016 caucuses against Senator Hillary Clinton, he earned 86% of the vote of 17-24-year-old Iowa caucus-goers, which accounted for 10% of respondents. The current 2019 poll—which CNN and MSNBC highlighted all day on Tuesday— is a significant undersampling of the very youngest set of voters, which is Bernie’s strongest block. Of course, neither network nor the digital political sites that push these polls around provided their audiences this information.

Perhaps even more strikingly, the Suffolk/USA TODAY poll included just 44 No Party/Independent voters, making up 8.8% of the 500 sampled. In 2016, independents made up 20% of Democratic caucus-goers, with 69% voting for Bernie Sanders. Overall in Iowa, no party voters account for 36% of the electorate. There appears to be an issue with sampling methods of Suffolk/USA TODAY as the number of No Party/independent voters sampled don’t match up with actual Iowa demographics, making room for media to announce an early death for the Bernie campaign when more accurate polling methodology may not support that. Corporate media leaving out these important numbers is also known as lies by omission.

There’s also the fact that Suffolk/USA TODAY’s polling at this early stage in the election has a rough history. In August of 2015, the polling dups conducted a similar poll that landed Hillary Clinton’s predicted win at 54%—with Bernie’s predicted loss at 20% for 2016. This poll, too, had issues with its sampling that was likely a large part of why its results weren’t anywhere close to the reality of the 2016 caucuses where Hillary Clinton pulled out an extremely narrow, and contested, win of 49.84% to Bernie Sanders’ 49.59%.

The 2020 Iowa caucus will see some changes to the process that may be in Senator Sanders’ favor. Sanders is favored among younger and less-wealthy voters who sometimes have difficulty attending and participating in the caucus process because of work and health concerns. As part of a new effort in 2020, there will be six “virtual caucuses” held in Iowa to solve accessibility concerns among the electorate. Virtual caucuses will include options to take part via phone or computer and will account for 10% of the delegate spread—in-person caucusing will account for the other 90%. This twist has pollsters, likely including Suffolk/USA TODAY, scratching their heads at how to account for the changes. With the ability to register same-day for in-person caucusing and now to caucus remotely, more Sanders voters may be able to participate. Of course, there are others who speculate that the move will mostly benefit older voters with mobility issues, who are not Sanders’ base.

As always, it’s easy for media to lie with statistics and pluck exactly the headline they want from a set of data. It’s those who look beyond the headlines and into reality that come out winners in the end.

Enjoyed this reporting and want us to keep ripping the veil off of 2020 polling? BECOME A STATUS COUP MEMBER, today! With deep insights and in-field reporting, there’s no other outlet doing what we’re doing. JOIN HERE: http://StatusCoup.com/join