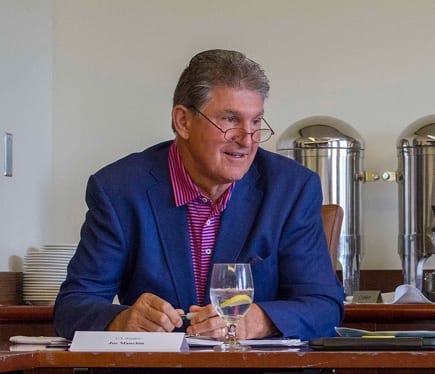 Note: This article touches on some heavy subjects, including opioid addiction, so if you’re not comfortable with this, we would advise you don’t read the article. Also, if you’re reading this and suffer from opioid addiction then please seek help. There are so many ways you can do this nowadays – you can even get Suboxone online if you don’t want to go to a clinic. Finding a safe and trusted way to get treatment is vital to your recovery.

Joe Manchin, Democratic Senator from West Virginia, is fighting for re-election in West Virginia-and as seen throughout his career, he’s tossed principle or decency to the wind to keep power.

Manchin, who’s voted in lock-step on key appointments made by President Trump; from extremist right-wing Judge Neil Gorsuch to recently becoming the only Democrat to vote for Brett Kavanaugh’s confirmation despite multiple women accusing him of sexual assault and misconduct. Manchin, hailing from Trump country in West Virginia, also voted to confirm former Secretary of Oil-eh hem, clear my throat, meant Secretary of State-Rex Tillerson along with voting for one of W and Cheney’s torture minions in Gina Haspel for CIA director and Mr. Ooops himself, Rick Perry as Energy Secretary.

If you talk to any politically-aware West Virginian, which Status Coup has, the D in front of Manchin’s title is merely symbolic: he’s a Republican through and through. And despite his consistent voting with Trump and Republicans, and total disregard for the working people of West Virginia, toothless and equally corrupt Senate Majority Leader Chuck Schumer has never punished Manchin for jumping ship.

Manchin looks like he’s cruising to re-election: the average of polls on Real Clear Politics between him and WV Attorney General Patrick Morrisey has Manchin up by 12 points. Manchin’s yes vote on Kavanaugh did what he intended it to do: increased his poll lead and staved off the Trump-ness monster from going down to West Virginia and rallying his WV base against Manchin.

But Manchin’s latest attacks on his opponent (an equally corrupt GOP attorney general, by the way) is so beyond the pale of hypocrisy, it makes a mockery of the real suffering and pain opioid-stained West Virginians are dealing with.

Manchin held a press conference on Tuesday, October 23rd to attack Morrisey for what Manchin claimed was Morrisey’s impending decision to settle for $35 million with big pharma company McKesson Corp, which like a myriad of other big pharma vultures, has flooded West Virginia with addicting painkillers for well over a decade.

According to the suddenly-majestic Manchin, if this happens, it will be a “mugging in broad daylight unless West Virginians speak up.” He added that Morrisey is letting big pharma off: “Letting them off easy is downright criminal.”

But, unlike the corporate media, Status Coup is here to tell you why Joe Manchin is full of SHIT (and coal).

In 2017, Manchin voted for Senate Bill 483, which was essentially a scheme by big pharma companies to weaken DEA enforcement against them in their efforts to distribute opioids to doctors and pharmacists in West Virginia. In flip-floppery Mitt Romney would be proud of, Manchin is now urging his colleagues to repeal the bill he voted for in a craven effort to fool West Virginia, which leads the country in drug overdoses with 600 per year for the last five years.

Years before Manchin’s vote for bill 438, the Senator tried to stop a filmmaker from releasing his portrayal of one West Virginia town ridden with opioids. According to filmmaker Sean Dunne, who was named Best New Documentary Filmmaker by the Tribeca Film Festival for his documentary “Oceana,” which focused on the West Virginia’s town with a rate of prescription drug overdoses over twice the national average. According to Dunne, he got a call from the supposedly tough-on-opioids Manchin asking him not to release the film.

Hmm…why would a Senator who wants to curb the staggering level of deadly drugs into his state try and stop that threat from getting more exposure? Follow the money!

While Manchin is attacking Morrisey for the “downright criminal” settlement with big pharma, his donor wrap sheet drops him squarely in the accomplice zone. His top donor is none other than the criminal and soulless pharmaceutical company Mylan, run by Manchin’s daughter Heather Bresch! Manchin has hoarded $197,200 from the company famous for hiking prices on life-saving anti-allergy EpiPen by over 500 percent.

Despite Mylan being disgraced in the halls of Congress and across media, that hasn’t stopped Manchin from cashing in on their greed and immorality: in the first-quarter of 2018, he took $51,250. All this while Mylan most likely violated federal antitrust laws and defrauded West Virginia’s Medicaid program by failing to provide rebates to the state’s Medicaid fund for EpiPen.

When challenged in the past on his big pharma donations, Manchin’s spokesperson offered this laughable muddying of the waters:

“He would be surprised to learn that he has received any contributions from the pharmaceutical industry given his mission of ending the opioid epidemic, including passing legislation that ultimately took 1.1 billion hydrocodone pills off the streets in 2015.”

Yes, I too would be shocked if my daughter’s pharmaceutical company was flooding my campaigns with money for me to look the other way while she skyrockets the price of life-saving drugs for vulnerable West Virginians.

“We are dealing with one of the largest addiction epidemics in the country…their shipping these mass amounts of pills into communities; it’s like they’re profiting off of people’s demise.”

Ultimately, no matter what the outcome of the senator race between Manchin and Morrisey on November 6th, West Virginians lose. Both are bought off stooges of big pharma ignoring the systematic killing of impoverished and vulnerable citizens in their backyard. It’s really no different than the Republican Party-and some Democrats-looking the other way as our nation’s school children and adults are slaughtered in schools, malls, movie theaters, and at concerts.

Or, as Manchin put it-downright criminal.