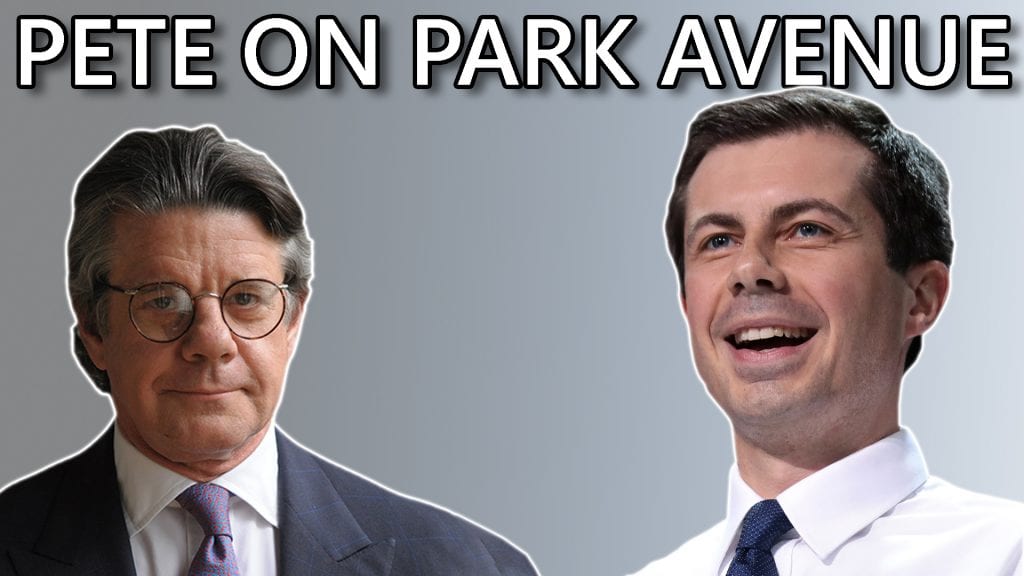 Pete Buttigieg is facing outcry from progressive activists a day after promising more transparency at his campaign’s high-dollar fundraisers.

In an email sent to press after pressure from journalists and the public, the campaign promised to open fundraisers to reporters and to release the names of people raising money for the campaign. This pledge for transparency was short-lived as Status Coup later learned that just one reporter would be admitted, and a day later the promised “pool report” from that reporter wasn’t made available to our journalists.

Despite the Buttigieg campaign’s limited release of information about the location of the December 10th fundraiser, an activist from New York Communities for Change was able to get inside the doorman-protected building after her group and others located the event. These activists broke the news that the fundraiser was held at 580 Park Avenue in New York City— where apartments are currently on the market for between $4 million and $10 million.

VIDEO: We found #WallStreetPete on the upper east side of Manhattan raising $ from billionaires at 580 Park Ave.

They wouldn’t give us the address, so we found him anyway.

Unfortunately, they wouldn’t let us in ☹️ pic.twitter.com/hj1AukkNfa

Activists say they were able to track down the home of the fundraiser’s host, Geoffrey Hoguet, after doing a search of Pete Buttigieg donors within the reported location on the FEC’s website. Hoguet, who has given the maximum allowed donation of $2,800 to the South Bend mayor’s campaign, fit the criteria.

The New York Times reported the event in Hoguet’s home was attended by about 80 people. While Status Coup has yet to receive the fundraiser pool report or additional details, we have found that Geoffrey Hoguet is exactly the type of donor progressives and activists have been wary of funding a presidential campaign.

Buttigieg has portrayed himself as an ordinary working man of the people—America’s mayor. But, his high-dollar fundraiser hosted by Hoguet sends the opposite signal. Geoffrey Hoguet is a Rothschild heir, a family that is so wealthy they not only owned but have recently sold historic property in Austria that is the size of Manhattan for $112 million.

Hoguet manages the eponymous GRH Holdings LLC, a company that invests in real estate and public and private equities. A Wharton grad, he’s had a long career working in banking, investment, and equities as a member of Creditanstalt Investment Bank, Hoguet, Keller, Wittman & Co., and Brown Brothers Harriman & Co.

Pete Buttigieg’s campaign certainly isn’t the investor’s first foray into Democratic political boosting. In 2016, Hoguet gave a combined $85,300 to the DNC and near the maximum donation allowed to Hillary Clinton.

Hoguet has also been a generous donor to The Clinton Foundation.

Perhaps more troubling for progressives is that Hoguet has been on the International Advisory Council of the International Crisis Group (ICG), a designation that comes with giving an annual donation of between $25,000 and $99,999 to the group (it’s worth noting that McKinsey, a company Buttigieg worked with for three years, has also held this designation with ICG).

At its start, George Soros, a favorite, wealthy left-wing nemesis of the right-wing that many progressives also oppose, provided the seed funding for the ICG, which poses as an organization “working to prevent wars and shape policies that will build a more peaceful world.”

But the ICG is mired in controversy from those who question its true commitment to peace in light of its funding. Around half of the group’s funding comes from governments, including the United States government. Corporate funders include those with a definite incentive to extract oil and gas from other countries, such as BP, Chevron, Shell, and Tullow Oil. With expenses coming in at around $20 million a year, the NGO plays a large role in influencing foreign policy decision-making.

Reporting from the Center for Economic and Policy research casts further doubt on the mission of the Crisis Group. In 2013, the ICG released a report on Venezuela. In the report, they questioned the validity of the election result and predicted violent opposition to the elected government led by President Nicolás Maduro (former President Jimmy Carter’s election observation group called Venezuela’s electoral system the best in the world).

This, along with regime change, has also been the position of ICG funder, the U.S. government. In 2019, ICG seemed prophetic as President Trump officially recognized Juan Guaido as the interim president of Venezuela after what many have labeled a coup attempt to oust the democratically elected president, Nicolás Maduro.

Pete Buttigieg attended another New York City fundraiser this evening, this time on the Upper West Side. Buttigieg’s campaign did not release the location of this fundraiser, but activists have once again found the location of the event by following the tracks of the mayor’s wealthy donors, which is reportedly 57 West 69th Street at the home of tech billionaire Kevin Ryan.

On his campaign website, Pete Buttigieg says he is “running to be the president who will stand amid the rubble, pick up the pieces of our divided nation, and lead us to real action by doing right by Americans who have waited far too long.”

Progressives are finding that the candidate seems more aligned with doing right by those who have the deepest pockets as the door gets shut in their faces over and over again.

According to Real Clear Politics’ average of Iowa and New Hampshire polls, Buttigieg is currently polling in first place in Iowa and second in New Hampshire.

Update: Pete Buttigieg’s campaign called the cops on the peaceful protesters outside of tonight’s Upper West Side fundraiser:

Want more reporting from Status Coup? Sign up for as low as $5/month to become a member! You’ll get bonus content, member calls, and more! http://StatusCoup.com/join